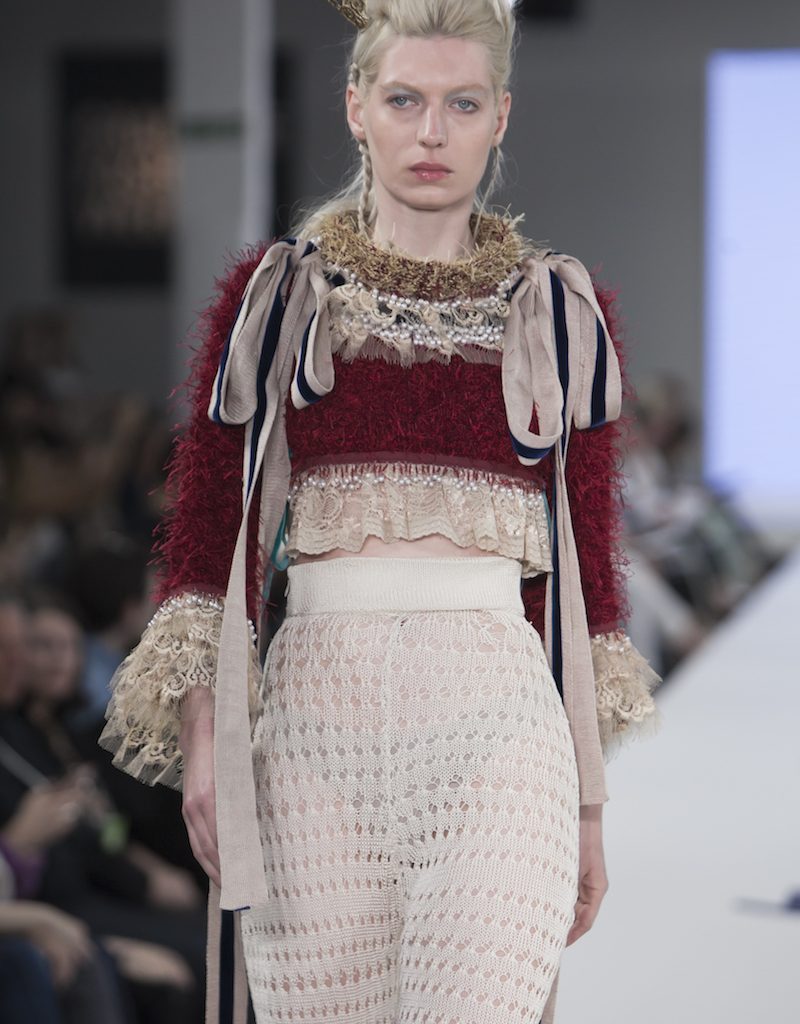 With Graduate Fashion Week kicking off this Sunday at the Old Truman Brewery, it was the place to meet the future of creative design talent. Specifically, Northumbria University attracted attention with their Fashion graduates, who lured visitors to their evening catwalk show.

The catwalk room’s atmosphere, spacious and bright with upbeat music coming through the speakers, warmed up the audience who were ready for the first young designer; Caitlin Hudson. Models wearing crowns, tailored dresses with nude ruffles on sleeves and chest; Hudson’s designs were the epitome of Royal Britannia, particularly Queen Elizabeth’s reign from young to old. Inspired by the Queen’s elegant gowns, Hudson’s challenge was centred around the traditional knit with contemporary fabrics being weaved into each look, such as velvet and lace. Hudson’s aim for a new playful twist on the traditional royal ceremony was clearly seen in her final look; a beige knitted trouser with ruffles arrayed in rows around the legs combined with a knitted turquoise crop top. The highlight was the maxi cape with layered ruffles in a mixture of burgundy and bisque softly tied into a ribbon on the front.

Kicking off the show with an ode to the Royals the catwalks music quickly transformed from a classic to a rough and defensive beat, to introduce creative talent, Kate Alexander. With sporty and functional pieces of clothing, the collection touched upon England’s Hooligan culture. Inspired by the BCF boys (Border City Firm) Alexander’s collection dives deep into tribalism and the rough hooligan fights in Carlisle. “The collection touches on the notion of hometown glory/pride, (…) the series of emotions that an individual feels before, during and after 90 minutes on a Saturday, and what it takes to be a ‘tough man’ and gain the respect of others”, she describes in her portfolio. With functionality and resistance at the core of the designer’s inspiration, the signature look that stood out the most was a scarf coat, an oversized turtleneck covering the face and transitioning to a seaweed popper bomber jacket.
Charlotte Cannon’s reinterpretation of the working class culture was another remarkable highlight of the Northumbria show. Touching upon the dying profession of coal mining, the collection resembled a redefinition of workwear transformed into active sportswear pieces as she says: ”’Going Underground’ is ‘Tarn’ through and through.” The key colours seen throughout the collection were highly visible and reminded of reflective vests; in focus were screaming orange, black, greys and denim blue seen through the main silhouette of overalls with maxi pockets on both sides.
The Northumbria fashion show closed with Liam Falcus, whose collection recalled the Rocky movies, ’Eye of the Tiger’ and Bruce Lee. Tiger embellishment on boxer shorts combined with fetish see through nettops in a boxer taekwondo collection was the result. Based on the light designed black shoe-socks that fit like a second skin, the footwear design aimed to be light and almost invisible. The most impressive look of Falcus designs was the olive tight fitting long sleeve top with loops led cross-over on front and back.

The message is clear; Northumbria University has more than one genius under its creative roof and the potential for both, womenswear and menswear was clearly evident. The catwalk show consisted of seventeen young designers in the running order with each of them challenging different tribes and subcultures. 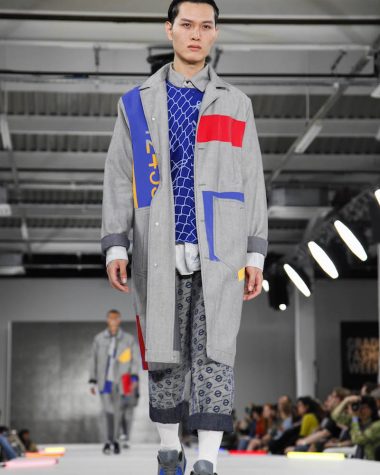