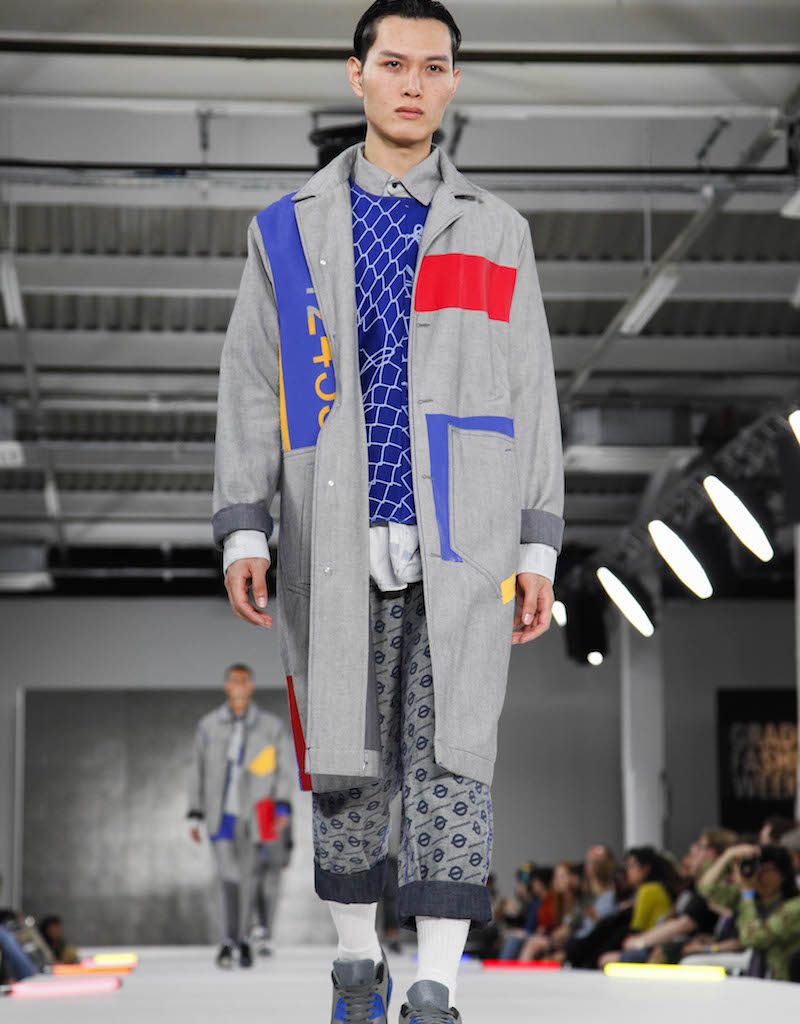 THE RUNNING ORDER OF THE MANCHESTER SCHOOL OF ART ON MONDAY EVENING CONSISTED OF 20 MAGNIFICENT DESIGNERS. BETHAN CURRIE, ZSOFIA JUHASZ, CHAKRA MANGGILINGAN AND EMILY PLUMB WERE THE HIGHLIGHTS DEMANDING THE RUNWAY.

Kicking off with Bethan Currie’s final collection, it was a wakeup call of the late ’70s and inspired by the Common Women’s Peace Camp. Her artwork represented the fashion rebel, marching against nuclear weapons for harmony and peace in the world. Hand-stitched faux fur coats in juicy lemon and turquoise with a peace symbol woven into the back conveyed this strong message.

Young talent Zsofia Juhasz, based her design on the ground of her work experience in San Francisco. Inspired by the city and her job at Old Navy, she began collecting vintage Polaroids. “I created my initial knit samples based on the faded colours of the photographs. I wanted to capture the unexpected light effects analogue photography produces. I kept the shapes simple to allow the fabrics to be in the foreground. I also wanted to make clothes that are comfortable and fun to wear!,” she says. The collection sparked in detail, with fringy rainbow sweaters to culottes and comfy pockets. Juhasz’s design also scored in the array of fresh colours, which included hues of sunny yellow, slate and azure. Juhasz eye-catcher piece was an asymmetric Karo chequered sweater with maxi-ruffled rainbow sleeves.

Cameo and colourful rainbow prints introduced the final collection of Emily Plumb, who specialises in print:

“MY COLLECTION IS INSPIRED BY BRITISH SCULPTOR JASON DECAIRES [WHOSE] UNDERWATER SCULPTURES HAVE CORAL GROW OVER THEM CREATING INTERESTING TEXTURES AND COLOURS. MY PRINTS BEGAN DEVELOPING FROM THIS.”

Inspired by Bianca Jagger and the ‘70s, Plumb’s aim was to bring back powerful womenswear. Models wearing light sheer fabrics with water coloured freehand prints walked down the runway in transparent PVC open-toe heels. Plumb’s signature look appeared in a minty green cameo trouser with a cinched waist and magenta blouse that transitioned into a vivid collar scarf. Worn on top, the airy yolky see-through coat made a perfect substitute to the good old British raincoat for summer breezy days.

Courtney Howard’s collection invited to a game of chess and a graphic print challenge for the eye of the beholder. A coat in a playful fusion of marine-blue and grey with ruffles running from top to bottom at the shoulder seam rang in her powerful collection. Hints of PVC fabric switched up the sophisticated collection, conveying a compelling rather than a fetish result. A  favourite and takeaway of Howard’s designs? The candy floss PVC suit with a peplum waist; Whoever said that peplum tops were out, was definitely wrong. 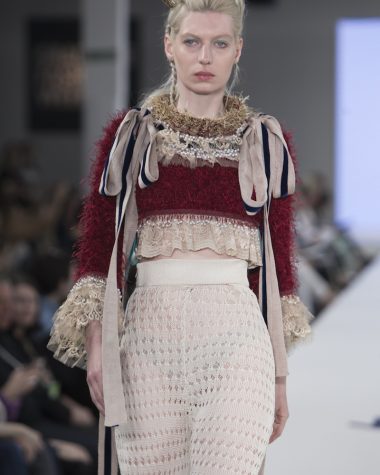 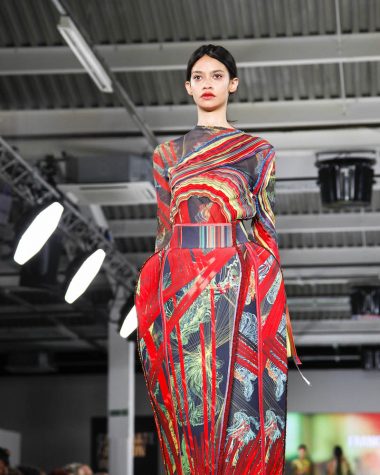